The History of the Automobile

The First Mass Producers of Cars - The Assembly Line 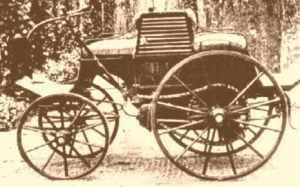 By the early 1900s, gasoline cars started to outsell all other types of motor vehicles. The market was growing for economical automobiles and the need for industrial production was pressing.

Rene Panhard and Emile Levassor were partners in a woodworking machinery business, when they decided to become car manufacturers. They built their first car in 1890 using a Daimler engine. Edouard Sarazin, who held the license rights to the Daimler patent for France, commissioned the team. (Licensing a patent means that you pay a fee and then you have the right to build and use someone's invention for profit - in this case Sarazin had the right to build and sell Daimler engines in France.) The partners not only manufactured cars, they made improvements to the automotive body design.

Panhard-Levassor made vehicles with a pedal-operated clutch, a chain transmission leading to a change-speed gearbox, and a front radiator. Levassor was the first designer to move the engine to the front of the car and use a rear-wheel drive layout. This design was known as the Systeme Panhard and quickly became the standard for all cars because it gave a better balance and improved steering. Panhard and Levassor are also credited with the invention of the modern transmission - installed in their 1895 Panhard.

Panhard and Levassor also shared the licensing rights to Daimler motors with Armand Peugot. A Peugot car went on to win the first car race held in France, which gained Peugot publicity and boosted car sales. Ironically, the "Paris to Marseille" race of 1897 resulted in a fatal auto accident, killing Emile Levassor. (Learn more about Panhard and Levassor)

Early on, French manufacturers did not standardize car models - each car was different from the other. The first standardized car was the 1894, Benz Velo. One hundred and thirty four identical Velos were manufactured in 1895.

America's first gasoline-powered commercial car manufacturers were Charles and Frank Duryea. The brothers were bicycle makers who became interested in gasoline engines and automobiles and built their first motor vehicle in 1893, in Springfield, Massachusetts. By 1896, the Duryea Motor Wagon Company had sold thirteen models of the Duryea, an expensive limousine, which remained in production into the 1920s. (Learn more about Charles and Frank Duryea)

The first automobile to be mass produced in the United States was the 1901, Curved Dash Oldsmobile, built by the American car manufacturer Ransome Eli Olds (1864-1950). Olds invented the basic concept of the assembly line and started the Detroit area automobile industry. He first began making steam and gasoline engines with his father, Pliny Fisk Olds, in Lansing, Michigan in 1885. Olds designed his first steam-powered car in 1887. In 1899, with a growing experience of gasoline engines, Olds moved to Detroit to start the Olds Motor Works, and produce low-priced cars. He produced 425 "Curved Dash Olds" in 1901, and was America's leading auto manufacturer from 1901 to 1904.

American car manufacturer, Henry Ford (1863-1947) invented an improved assembly line and installed the first conveyor belt-based assembly line in his car factory in Ford's Highland Park, Michigan plant, around 1913-14. The assembly line reduced production costs for cars by reducing assembly time. Ford's famous Model T was assembled in ninety-three minutes. Ford made his first car, called the "Quadricycle," in June, 1896. However, success came after he formed the Ford Motor Company in 1903. This was the third car manufacturing company formed to produce the cars he designed. He introduced the Model T in 1908 and it was a success. After installing the moving assembly lines in his factory in 1913, Ford became the world's biggest car manufacturer. By 1927, 15 million Model Ts had been manufactured.

Another victory won by Henry Ford was patent battle with George B. Selden. Selden, who had never built an automobile, held a patent on a "road engine", on that basis Selden was paid royalties by all American car manufacturers. Ford overturned Selden's patent and opened the American car market for the building of inexpensive cars. (Learn more about Henry Ford)